A Game of Thrones: The Card Game – House of Talons 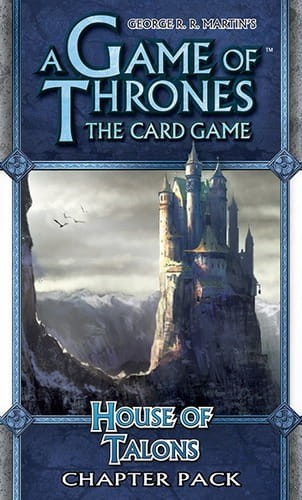 Shadowcats prowled those passes, rock slides were common, and the mountain clans were lawless brigands, descending from the heights to rob and kill and melting away like snow whenever the knights rode out from the Vale in search of them. Even Jon Arryn, as great a lord as any the Eyrie had ever known, had always traveled in strength when he crossed the mountains.
–George R.R. Martin, A Game of Thrones

Venture into the Vale of Arryn with House of Talons, the fifth Chapter Pack in the Wardens cycle for A Game of Thrones: The Card Game. Among its sixty new cards (three copies each of twenty different cards), you’ll find plenty of cards to support every Great House, including iconic characters like Bronze Yohn Royce, Jhogo, and Robert Arryn.

As you ascend the heights of the Eyrie, House of Talons also continues the major themes of the Wardens cycle, adding options for decks built around high-cost, recognizable characters. In addition, this Chapter Pack enhances decks build around key traits, ranging from Rainbow Guard to Dothraki to Sand Snake. It also introduces characters that can interact with new Castle plots, and presents new “limited response” abilities, making them a more meaningful part of your deck-building.