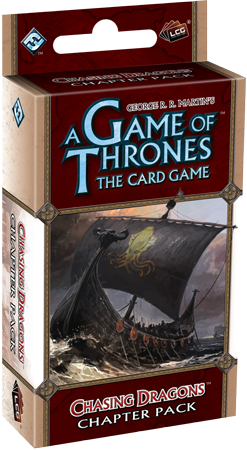 The square brick towers of Pentos were black silhouettes outlined against the setting sun. Dany could hear the singing of the red priests as they lit their night fires and the shouts of ragged children playing games beyond the walls of the estate.
–George R.R. Martin, Chasing Dragons

The great Houses of Westeros bring their intrigues and power struggles to Essos in full force with the 60 new cards (3 copies each of 20 different cards) in Chasing Dragons. Armies gather in preparation for war, and the Houses call upon allies to exert their influence throughout the Free Cities.

Chasing Dragons introduces many notable figures, including new Lords and Knights to advance their Houses' interests, Raiders to cruise the coasts and storm the shores, and new Armies to mass outside the Eastern continent's great city-states. Even the cities are represented with a new Kingdom location and two City plots that grant additional strength and flexibility to City plot decks.

A Game of Thrones LCG: A Harsh Mistress

A Game of Thrones LCG: A Harsh Mistress

In George R.R. Martin’s A Song of Ice and Fire, the knights and lords who strive to live honorably often find themselves conflicted. The honorable path is seldom the easiest and often forces its advocates into difficult decisions. Many times, conflicted lords have turned from the safer and more practical course of action and thrown themselves...

A Game of Thrones LCG: A Roll of the Dice

A Game of Thrones LCG: A Roll of the Dice

The Great Houses each take long gambles as they double down on the intrigues they have hatched in Essos. At stake? The Seven Kingdoms of Westeros! A Roll of the Diceconcludes the Beyond the Narrow Sea cycle of Chapter Packs in climactic fashion as each of the Great Houses reinforces its position by recruiting Armies, hiring Mercenaries...

A Game of Thrones LCG: The House of Black and White 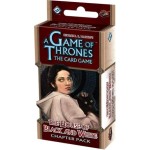 A Game of Thrones LCG: The House of Black and White

The House of Black and White introduces 60 new cards (3 copies each of 20 different cards) that further enrich the Beyond the Narrow Sea cycle and its exploration of the people, places, and events of Essos. House Stark features prominently in this Chapter Pack, but players will also find a host of high-impact locations for each House.

Valar Dohaeris introduces 60 new cards (3 copies each of 20 different cards) to serve you during your contests of A Game of Thrones: The Card Game. A host of new characters arrive to serve the Great Houses of Westeros, including Knights, Fools, Allies, and even Lords. All must show obedience and play their roles in the myriad battles and intrigues...

The first Chapter Pack in the Beyond the Narrow Sea cycle, Valar Morghulis immerses players in the deadly intrigues of the Eastern continent, Essos. No individual has ruled all of Essos since at least the days of Valyria. Now the Great Houses of Westeros take their agendas to this massive and diverse continent with 60 new cards...