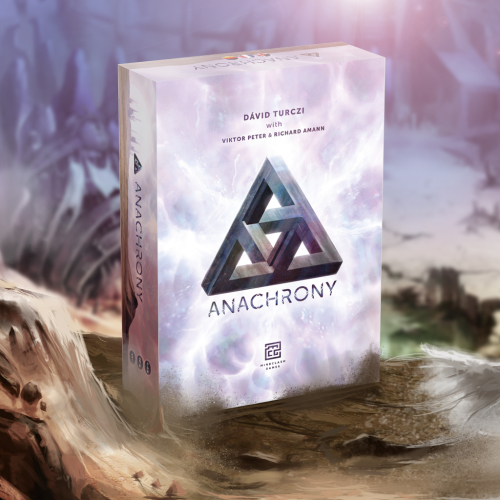 Anachrony is a competitive, epic Euro-style strategy game with worker placement at its core, set in a grim future where Earth has been rebuilt along four different ideological Paths. The game is played through a series of Eras, with a time travelling twist - players can use Time Rifts to reach back to earlier Eras as the game progresses.

Players assume the roles of iconic leaders of the four ideological Paths, striving for the supremacy and prosperity of their people, and do everything they can to prepare for a game-changing event: after the fourth Era, an asteroid impact shakes Earth, threatening to destroy the World Capital, New Earth’s last independent city. When the time comes, the Paths can take their part in evacuating the collapsing Capital. In the end, one of the Paths will be the new home to the reformed World Council, and lead humanity to a brighter future.

Insert compatible with Anachrony®, and the Exosuit Commander Pack® expansion. The design provides both efficient storage and improved game play. The trays can be utilised during the game, and they greatly aid set-up and clear-away times.

This Classic Expansion Pack includes all the modules that were previously released in the Anachrony Base Box and the Exosuit Commander Pack: the Doomsday module, the Pioneers of New Earth expansion and the Guardians of the Council module.

Future Imperfect is a modular expansion for Anachrony, with three new modules expanding the possibilities beyond new horizons. These modules are playable on their own, but they are also compatible with each other and most past and future Anachrony modules and expansions.

In the alternate storyline of Fractures of Time, Anachrony’s first major expansion, the four original Paths and the newly formed, sanguine Path of Unity have gained access to a powerful new technology called Flux. Flux Cores can be acquired in the Amethynia Valley, the expansion’s new main zone.