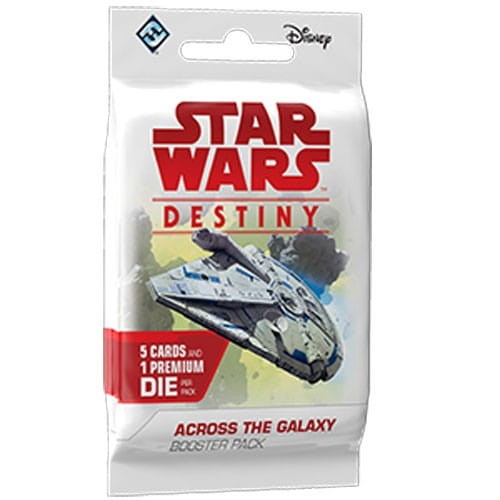 “I’m going to be a pilot. The best in the galaxy.”
–Han Solo, Solo: A Star Wars Story

Across the galaxy, citizens dream of adventure. Of becoming a dashing rogue, a skilled pilot, or maybe even a Jedi Knight. This where Luke Skywalker, Anakin Skywalker, Rey, and even Han Solo began their journeys. Feeling trapped, knowing they meant for something greater, just needing one shot...

Fantasy Flight Games is proud to announce Across the Galaxy, a new set of booster packs for Star Wars™: Destiny featuring 160 brand-new cards!

Across the Galaxy brings the characters of Solo: A Star Wars Story to Star Wars: Destiny. Before he was a hero of the Rebellion, Han Solo was a cocky young pilot just looking for a little adventure. With a crew of like-minded individuals that includes Lando Calrissian and Tobias Beckett, the dashing young rogue finds his way to Star Wars: Destiny.