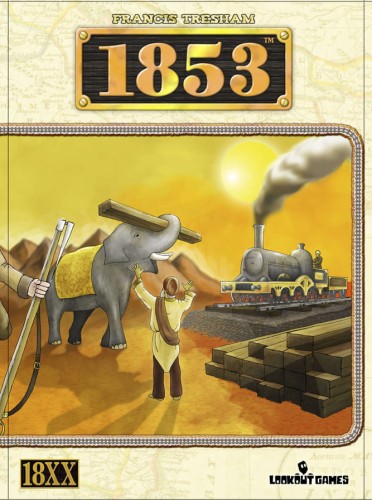 1853 India is a railway building game using the 18XX game system, set in imperial India. It was originally published in 1989 by Hartland Trefoil. Contrary to many other 18XX games, 1853 does not require aggressive stock trading, but skills in engineering the best possible routes. 1853 is a game that takes several hours to play. Even players familiar with the rules should require at least four hours.

For its 20th anniversary, Lookout Games and Mayfair Games Inc. published an updated version in Oct 2009.
It is based on the retuned rules by Stuart Dagger/Steve Jones that were edited by Lou Jerkich, Dick Ruck and Jeff Heuer.

18OE: On the Rails of the Orient Express is a monster 18XX train game. It takes 12+ hours to play. But comes with shorter scenarios. You can even build the legendary orient express. The map covers all of Europe! Hard to get ! As in every 18xx game players invest in railway companies.

1865 Sardinia is a board game belonging to the 18xx series for 2-4 players and set on the Sardinia island (and Corsica). Players play the role of 19th century entrepreneurs investing in the construction as well as the financial and operational management of railways. Selling and buying shares on the stock market, seeking new sources of funding, laying track and placing stations...