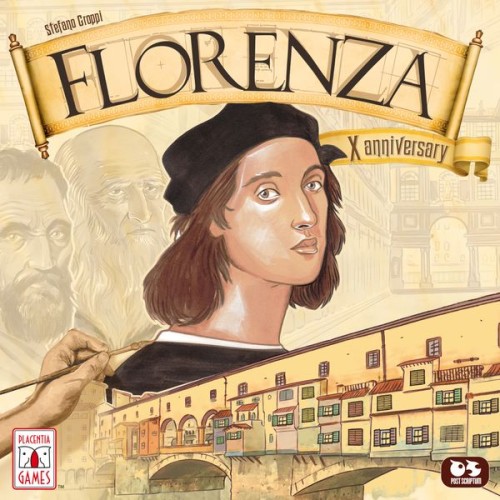 Originally released in 2010, Florenza is a high complexity resource management game, in which accurate planning and precise management of workers and resources are crucial to victory. No mistake will be forgiven.

In Florenza, the players are the heads of the most powerful families in Florenza during the Renaissance period. The goal of the game is to become the most famous patron of the arts by hiring the most famous artists of the period and financing their works. Each player can commission artworks in his own district, the Cathedral, or in the civic buildings of the city.

Each artwork requires money and resources to complete. To earn the money and resources the artists need, the players send their workers to labor in various workshops, possibly even in their opponents’ districts. Additional workers can be earned by offering charity to the church. During the game, players will earn prestige points, primarily by completing artworks. prestige points can be spent during the game, but at the end of the game they will be the player’s primary source of victory points.

All of the characters in the game are real historical figures that lived and worked in Italy during the Renaissance. Most of them worked in Florence. All of the buildings in the game were real Renaissance workshops. The artworks the players can complete include the masterpieces of some of the most famous artists in the world.

Florenza: Captains of Fortune expansion consists of six cards that represent the "Captains of Fortune", with their correlated tiles for the draw from the bag. This new kind of character allows you to take the field in Renaissance battlefields to gain glory...and some extra resources!