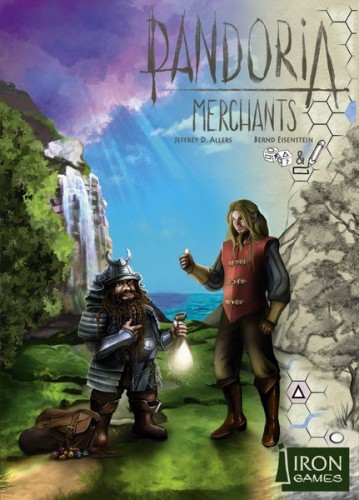 Overwhelmed by the Goblin hordes, remnants of the Five Realms were forced to flee their prosperous Hiddenlands, eventually establishing their civilizations again in the newly discovered lands of Pandoria. But as they stake their claims and build anew, the old rivalries that were once their downfall resurface. You take on the role of one of these realms, working together with your opponents to develop Pandoria. But all the while, you are also looking to be the dominant realm in the land through gathering resources, building, and learning spells that harness the magic of this mysterious place.

Pandoria Merchants transforms the critically-acclaimed board game into a “roll-n-write” game that you can print at home and play anywhere — even online! In the more streamlined “family” version of the game, you gain valuable spells whenever you close out a region, and instead of managing different resources, every region rewards you with victory points. If you are new to the world of Pandoria, then Pandoria Merchants Family is highly recommended.

For the first time, you can play Pandoria solo:
Your scouts have discovered a hidden valley deep in the mountains, divided by rivers and enormous lakes, a place for your Realm to expand exclusively! But as you begin to settle these new lands, you find that you are not alone: Trolls from the surrounding hills have come to lay claim. As you compete for the most influence in these 8 new territories, the Trolls become stronger. Can you develop your realm fast enough to be the dominant people group when the land is settled?